Are you a CFD enthusiast? Willing to work on the complex CFD simulations to simulate the real-world behaviour of the product under extreme circumstances? Want to reduce the pro-type testing and make the design changes faster? Look no further, the XFlow does this all.

Most of the numerical solvers are classical Finite Volume methods based on the Navier – Stokes equations. However, even though those methods have been widely investigated they still face important drawbacks limiting their application to real industrial problems. To overcome these drawbacks alternative methods are emerging. Among them, the lattice-Boltzmann method (LBM) is becoming one of the most interesting alternatives, and the development of new commercial LBM codes such as XFlow provide new alternatives for companies to solve complex engineering problems.

XFlow is one of the most powerful Computational Fluid Dynamics (CFD) software designed for engineering analysis as a part of SIMULIA’s Fluids Simulation portfolio.  As it employs approaches like a proprietary, particle-based, fully Lagrangian makes the solver to easily handle the complex situations Like Aerodynamics, Aeroacoustics, Moving Parts, Free Surface Flows and Fluid-Structure Interaction.

As XFlow uses Large Eddy Simulation (LES) turbulent modelling, the vortices formations are captured almost as the real world eddies. Along with this, the user can also get the details with respect to Aerodynamic forces like Drag, Lift etc., and the angle of attack. Since, XFlow has provision for Rigid Body Dynamics and Enforced geometry options, the user can also simulate the movement of the geometry such as Dutch roll of an Aircraft, Wind tunnel testing of an Automobile etc., 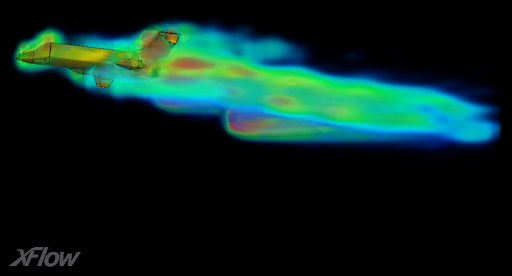 Mid-Air turn of an Aircraft

Since the XFlow solver is Compressible, it has the capability to deal with Sound Pressure Waves. LES approach has the capability of computing the flow fluctuating structures down to the resolution mentioned by the user. This approach is referred to as Direct Computation of Sound (DCS). Also, this solver doesn’t introduce any artificial shear viscosity or stabilization. The most useful output from this analysis is Sound Pressure Level (SPL).

Vorticity of a High-Speed Flow in a Duct Pipe.

Rigid Body Dynamics also known as 6 – DoF Method in CFD solvers. This allows the user to control each Degree of Freedom for the moving body and user can control the movement of the body by providing External Forces and Moments.

Enforced Geometry allows the user to control the lateral and rotational movements individually in all directions. 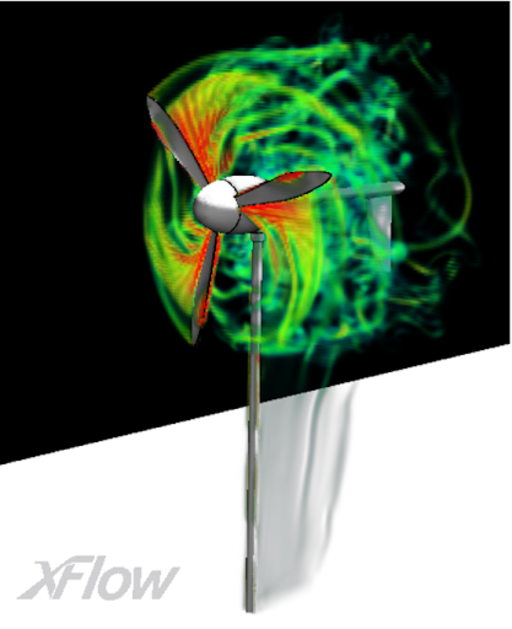 Vorticity plot during the movement of a Wind Turbine.

XFlow can also handle Multiphase flows along with free surface. This enables the user to use Particle – based tracking, Phase field and Volume of Fluid (VoF) methods during the process.

Particle – based tracking method advects discrete markers at the bulk of the flow and detects an interface whenever particles of different types are neighbouring each other.

Phase field method advects a scalar field that, besides the terms due to pure advection, has additional forcing terms originating from a potential with attractors at concentration VoF = 0 and VoF = 1, enforcing separation of phases. Similarly, large changes in the Phase field are interpreted as an interface. 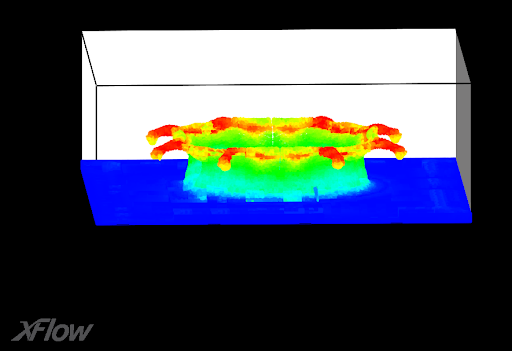 Crown Splashing (Impact of droplet on a thin film)

To calculate the structural integrity of the geometry, only Velocities, Displacements and Forces from XFlow will be used.

PS: Refer to the below table for XFlow and Abaqus compatibility.